JavaScript and not kicking puppies

(Updated 10 Nov 2022: ended up actually Twitter tracking script. Still not worried about Twitter, too much, just worried about whoever ends up with their assets.)

I decided not to do that for this site.

Yes, user tracking is creepy, and yes, collecting user information without permission is wrong. But read on for what could be a better approach for sites that can make a bigger difference.

First of all, Twitter is so far behind in their attempts to do surveillance marketing that they're more funny and heartening than ominous. If getting targeted by one of the big players is like getting tracked down by a pack of hunting dogs, then Twitter targeting is like watching a puppy chew on your sock. Twitter has me in their database as...

Advice from "me" as I appear on Twitter: As your doctor, I advise you to cut out HFCS entirely unless you're at a family thing where you should just eat a little and not be an ass about it. When you're in town, stay at my hotel, where the TV is a 4k monitor on an arm that moves to make it usable from the sit-stand desk, and the WiFi is fast and free. No idea on the city water pipe thing though.

So if Twitter is the minor leagues of creepy, and they probably won't be something we have to worry about for long anyway, maybe we can think about whether there's anything that sites can do about riskier kinds of tracking. Getting a user protected from being tracked by one Tweet is a start. But helping users get started with client-side privacy tools that protect from Twitter tracking everywhere can help with not just Twitter tracking, but with the serious trackers that show up in other places.

Funny wrong Twitter ad targeting is one of my reliable Internet amusements for the day. But that's not why I'm not especially concerned with tagging quoted Tweets. Just doing that doesn't protect this site's visitors from retargeting schemes on other sites.

And every time someone clicks on a retargeted ad from a local business on a social site (probably Facebook, since more people spend more time there) then that's 65 cents or whatever of marketing money that could have gone to local news, bus benches, Little League, or some other sustainable, signal-carrying marketing project. (That's not even counting the medium to heavy treason angle that makes me really uncomfortable about seeing money move in Facebook's direction.)

So, instead of messing with quoted Tweet tagging, I set up this script:

This will load the Aloodo third-party tracking detector, and, if the browser shows up as easily trackable from site to site, switch out the page header to nag the user. 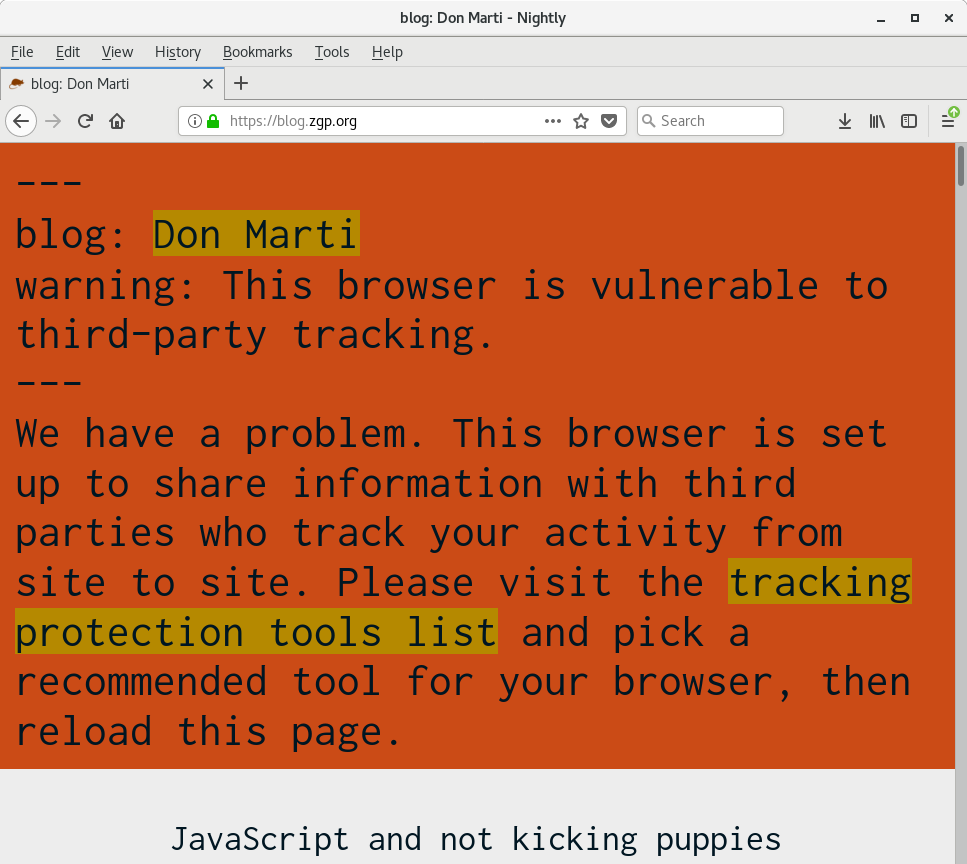 (If you are viewing this site from an unprotected browser and still not seeing the warning, it means that your browser has not yet visited enough domains with the Aloodo script to detect that you're trackable. Take a tracking protection test to expose your browser to more fake tracking, then try again.)

If the other side wants it hidden, then reveal it

Surveillance marketers want tracking to happen behind the scenes, so make it obvious. If you have a browser or privacy tool that you want to recommend, it's easy to put in the link. Every retargeted ad impression that's prevented from happening is more marketing money to pay for ad-sponsored resources that users really want. I know I can't get all the users of this site perfectly protected from all surveillance marketing everywhere, but hey, 65 cents is 65 cents.

Bob Hoffman's new book is out! Go click on this quoted Tweet, and do what it says.

The Dumb Fact of Google Money

The Time When Google Got Forbes to Pull a Published Story

Disabling Intel ME 11 via undocumented mode

Trump Damaged Democracy, Silicon Valley Will Finish It Off

Ice-cold Kaspersky shows the industry how to handle patent trolls