Hey, everybody, check it out. 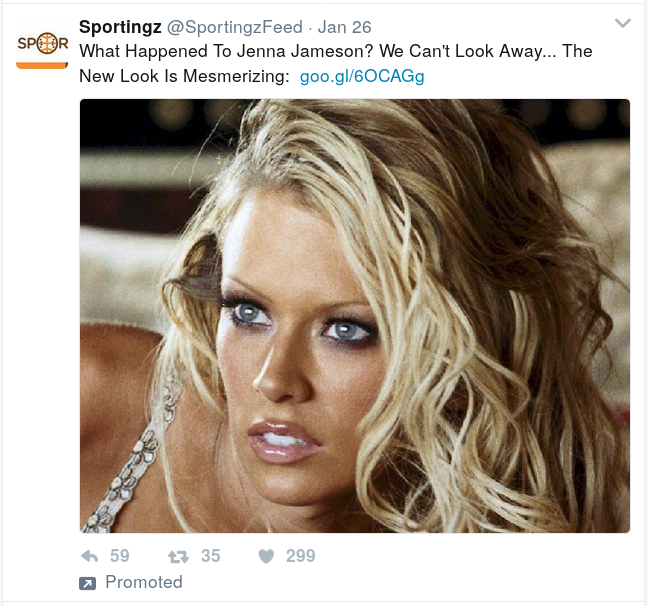 If you're "verified" on Twitter, you probably miss these, so I'll just use my Fair Use rights to share that one with you.

If you want to stick this kind of ad on your WordPress site, you just have to cut and paste some ad network HTML—not build out a deluxe office space on Market Street in San Francisco the way Twitter has. But the result is about the same.

What makes Twitter even more facepalm-worthy is that they make a point of not showing the ads to the influential people who draw attention to Twitter to start with. It's like they're posting a big sign that says STUPID AD ZONE: UNIMPORTANT PEOPLE ONLY. Twitter is building something unique, but they're selling generic impressions that advertisers can get anywhere. So as far as I can tell, the Twitter business model is something like:

Money out: build something unique and expensive.

Money in: sell the most generic and shitty thing in the world.

Facebook can make this work because they have a lot of eyeball-minutes. Chump change per minute on Facebook still adds up to real money. But Facebook is an outlier in that area, and there aren't enough minutes in the day for another. So Twitter is on track to get sold for $500,000, like Digg was. Which is good news for me because I know enough Twitter users that I can get that kind of money together.

So why should you help me buy Twitter when you could just get the $500,000 yourself? Because I have a secret plan, of course. Twitter is the site that everyone is talking about, right? So run the ads that people will talk about. Here's the plan.

Sell one ad per day. And everybody sees the same one.

Sort of like the back cover of the magazine that everybody in the world reads (but there is no such magazine, so that's why this is an opportunity.) No more need to excuse the verified users from the ads. Yes, an advertiser will have to provide a variety of sizes and localizations for each ad (and yes, Twitter will have to check that the translations match). But it's the same essential ad, shown to every Twitter user in the world for 24 hours.

No point trying to out-Facebook Facebook or out-Lumascape the Lumascape. Targeted ads are weak on signal, and a bunch of other companies are doing them more cost-effectively and at higher volume, anyway.

Of course, this is not for everybody. It's for brands that want to use a memorable, creative ad to try for the same kind of global signal boost that a good Tweet® can get. But if you want generic targeted ads you can get those everywhere else on the Internet. Where else can you get signal? In order to beat current Twitter revenue, the One Twitter Ad needs to go for about the same price as a Super Bowl commercial. But if Twitter stays influential, that's reasonable, and I make back the 500 grand and a lot more.

Newer: Some questions on a screenshot (27 May 2017)
Older: Understanding the limitations of data pollution tools (02 May 2017)