One place I will probably not buy a car.

(Update 23 Apr 2019: I wrote to ask this dealership how they got my info and didn't get an answer to my question. But they did put me on their email list in time to get the "April Shower of Savings" email so I've got that going for me which is nice.)

One place I will probably not buy a car: Franklin Sussex Auto Mall, in New Jersey.

I still have a Facebook account, I don't check Facebook often enough for it to be a good way to reach me. See the page footer here for contact info. mostly to keep up on the ad scene there. When I checked Facebook's page of ads targeting me, this company is listed under advertisers "Who use a contact list added to Facebook." 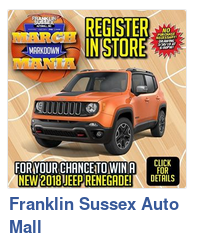 Somehow, Franklin Sussex Auto Mall got a hold of my email address or phone number, and uploaded it to Facebook. Have I ever shopped for a car in New Jersey? No. If I was shopping for a car, would I fly to New Jersey to buy it and then drive it home? No.

And now that I look at it, when I go through the advertisers that Facebook lists as having uploaded my info, most of them are car dealers I have never visited or contacted. Someone has a pretty good racket going here. How much are they making from the car dealers? (Yes, this is a bad thing, because car dealers could be spending that money to build positive reputation by funding local news, or other ad-supported resources with positive externalities, but we knew that already.)

Maybe when they write the history of the big social site era, it won't be about some all-seeing panopticon, but more about a bunch of people in a highly paid California bubble, mostly young guys who have been told they're smart their whole lives, getting out-hustled at a direct marketing business they don't really care about.

Confessions of a location data exec: ‘It’s a Ponzi scheme’

Consent Fraud: A Simmering Problem That Could Scald The Ecosystem

You’re being used to steal $50 billion in digital advertising

The New York Times’ Mark Thompson on how he’d run a local newspaper: “Where can we stand and fight?”

AT&T pulls ads from YouTube over predatory comments on children

Meet DrainerBot, the Ad-Fraud Operation That Could Be Stealing Your Mobile Data

Want to reduce political polarization? Save your local newspaper